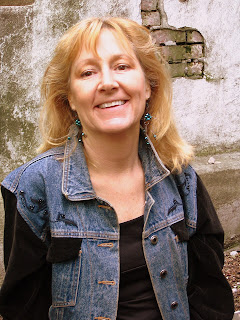 Masha Hamilton is the author of four critically acclaimed novels, most recently 31 Hours, released in September. She is the founder of the Camel Book Drive and the Afghan Women's Writing Project.

Shannon Cain: What inspired you to launch the AWWP?

Masha Hamilton: I returned to Afghanistan about a year ago, last November. On this trip, I found a greater pessimism among the women than during my previous visit in 2004. My own travel was severely limited due to security considerations, and the women I interviewed often spoke about how quickly the Taliban had taken over in the '90s, how quickly they were not allowed outside except in a burqa and accompanied by a male relative, how quickly they were denied access to schools. How quickly their worlds shrunk. There was fear that this could happen again. Although "moderate Taliban" may be a meaningful term in terms of negotiations with the Karzai government, it seems less meaningful in terms of women's rights. So there is definitely concern among Afghan women as the Karzai government moves toward incorporating the Taliban in some fashion.


SC: How did you organize the project and get it started?

MH: I had long considered teaching an online class to Afghan women writers; I decided to launch the class a few months after my November visit. But enthusiasm among the Afghan writers was palpable, and I rapidly understood the demand would outstrip my ability to meet it. That's when I began reaching out to American novelists, short-story writers, poets, memoirists, etc., who also teach, many of them my friends, and asking them to volunteer on a rotating basis.

SC: What are some of the barriers/risks these writers are overcoming in order to have their voices heard?

MH: Sometimes these women are overcoming major risks just to participate in the project. In several cases, their families do not know they are participating, and would not be happy. Virtually everything on the blog goes through some revision process, so exchanges back and forth between the student and her teacher are critical. Yet many have difficulties getting us the work: going into an Internet cafe is not possible for a woman alone, and a woman who goes in with a male relative makes herself the center of unwelcome, and sometimes threatening, attention.

SC: How has working with these writers changed your teachers’ perception of Afghan women? And your own?

MH: If you take a look at the newsletter, you will see the section called "A Word From Our Teachers." Often, they comment about how much more they understand about Afghan women at this point, and that they have been both educated and moved by working with the writers in ways they hadn't anticipated. This is definitely a two-way street and women at both ends of the project are benefiting. My own perceptions of Afghan women were formed by my previous trips, when I interviewed women in prison in Kabul and Kandahar, child brides, matriarchs of opium-growing families, war widows. I grew to appreciate the grace with which many handled enormous hardships.

SC: What are some of the stumbling blocks you’ve encountered along the way?

MH: The only stumbling block – which is also a strength – is that the teachers are here and the Afghan writers are there. We've largely overcome that with the help of a couple of awesome and amazing liaisons in Afghanistan. We also have a volunteer blogmaster in California and a volunteer technical director in Indiana who set up our secure online classrooms. This project has helped connect people in unusual ways -- I've heard from those who've read the blog and those who've heard about the project, and through this, I've been able to take part in some inspiring conversations. My hope for the coming year is that the blog readership will continue to grow because I think this is a unique and valuable project.

SC: Here at Kore Press we believe in the power of literature as a means toward social justice. Do you see the project contributing somehow to an improved standard of living for women in Afghanistan?

MH: That’s a large goal and my own goals are more modest. I hope we can connect Afghan women to American women as well as to readers from the U.S. and elsewhere. I hope the Afghan women can benefit as much as their teachers and readers do from this exchange. I hope we can let these women know we are here, we are listening, we care.

SC: What would you say resides at the heart of the Afghan Women’s Writing Project?

MH: AWWP is about sharing your story – and I think this is a human need that has been denied Afghan women for many years. Their stories were either seen as irrelevant and value-less, or expressed via male relatives, or sometimes expressed via the media. But not in their own words, in their own way.
Posted by Kore Press at 11:03 AM