How To Treat Your Minority Student 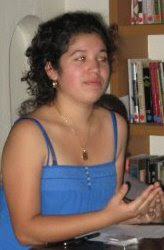 Sophia Licona is a high school student in Tucson, AZ. She is a long-time participant in the Kore Press Grrls Literary Activism Project.

Do you have trouble interacting with minority students? Does it seem like they are overrunning the schools? They just keep coming, year after year, lowering test scores, and speaking their foreign jibber jabber. Fortunately, the Minority Student Instruction Manual (MSIM) has now been written. What follows are solutions to all of your minority student problems.

The safest way to learn your minority student’s ability is to assume they don’t speak English. If they have a last name that can’t be pronounced, like Garcia, they probably won’t understand your course content. If they come in and try to declare that English is their first language, don’t be fooled. Insist they at least take an English fluency test, but it is best if they go through several weeks of ESL. Start out the ESL class with a picture of a dog. Point at the picture and clearly state, “dog, D-O-G, dog.” Have the student repeat the word several times. If your student complains that they “already know how to speak English,” they may be moved to a regular English class, but not before you comment on “how fast” they learn and “how well” you taught them.

Now, if you aren’t quite sure what your minority student’s heritage is, there are two (two, T-W-O, two) options. Option numero uno is to ask, after having an unrelated conversation, if your student has “recently been on vacation,” or if they are “just not Caucasian.” It is best to do this when the student is about to leave and must answer quickly. Option two is best if you have a vague idea of where your student may come from. If you think the student is from , ask “Are you from ?” When your student says, “No, my family is Mexican,” respond with, “Sweetheart, you must be mistaken. Are you sure your parents aren’t from ?” Thirty minutes of arguing is acceptable. After, remind the student that it is important to not be ashamed of where they come from. It may be in the student’s best interest if you recommend that they try to reconnect with their cultural heritage. Perhaps suggest watching the movie My Big Fat Greek Wedding.

When grading a minority student’s work, there are a few things to keep in mind. First, make sure they aren’t writing in clichés that they learned in those first few weeks of ESL. Suggest alternatives they might relate to culturally. For example, if a student compares something to “a knife through butter,” say, “Why don’t YOU write, like a knife through guacamole?” Any ethnic food will do. Also ask if there are any common sayings where they come from.

If your student has trouble picking a topic for a project, suggest an issue meaningful to them. If they are from , suggest they study communism in . They will already have a wide knowledge base because is a big country in their part of the world. Finally, when having a class discussion, don’t hesitate to ask your minority student for the Black community’s perspective, or the Hispanic perspective, or the Asian perspective, or the Indian perspective (it is important to separate from because Indians look more like Middle-Eastern terrorists than like Chinese). However, don’t let these guidelines limit you; get creative with your suggestions.

If a Black or Hispanic student ever approaches you about college, the advice you should offer is clear. If they have anything to say, listen patiently. Then, if they are smart, tell them how lucky they are to be Black or Hispanic. If they are remotely intelligent they need not worry about silly things like SAT scores; they will get into the school of their choice because of affirmative action. Well, maybe they won’t get into Harvard, or Stanford, or Yale, or [insert school here]. It is then acceptable to go off on a tangent about how soon all of our universities will be overrun by Black and Hispanic students with mediocre SAT scores and on financial aid scholarships.

Remember, when dealing with minority students, it can be hard to know what to say. However, parent-teacher conferences are easy to prep for. When your student’s parent arrives, speak loudly and slowly. If you can’t enunciate, just yell. Start by asking how to say hello where they come from, then use your newfound linguistic skills to say hello. Ask how they like . If they look confused, it’s fine. They probably don’t know what you’re saying. It’s not like they have a PhD in Rhetoric through the English department in AMERICA. Next, say what you need to say, and, if the student is getting good grades, state how well they represent Mexicans, or Indians, or whatever.

If you can’t remember any of this, just tell your student how beautiful you think their culture is. Let the student know you understand them and their “minority-ness.” Remember: you are doing the best you can with these people.