The Radical Art of Sowing Seeds and the "Net Win" 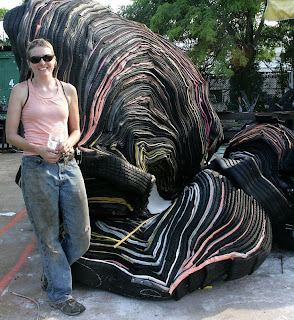 Deborah Fisher is a sculptor and critic whose work focuses on the structural meaning of climate change, or the relationship between the built world and the earth. She recently completed a large-scale public sculpture entitled Solid State Change for Middlebury College’s Environmental Studies building, for which she received a Puffin Foundation grant. She is an artist in residence at Sculpture Space in Utica, NY. Fisher contributes regularly to two online magazines: ArtCal Zine and A Gathering of the Tribes. She earned a BFA in studio art from the University of Arizona in 1997, and an MFA in visual art from UC San Diego in 2003, where she was a Regents scholar and recipient of the Center for Humanities Research Fellowship.

For more than a decade, I made sculpture. It feels good, viscerally, to take a concept in, chew on it, and either shit or regurgitate a third thing that is now neither you nor the original idea, but is a record of the journey from outside to inside and back again.

My motives have always been personal and deeply vulgar. That's art for you. Making meaning is a grabby activity. You see something and want to take it and make it yours. And while I deeply enjoy this arrogant, aggressive part, I also think that gratuitous creative license is boring. If there's going to be nastiness, I want some kind of redemption. I want a net win.

I'll make this real by telling a true story. I worked until recently for Socrates Sculpture Park, which Mark diSuvero founded and where he still keeps a studio for his work on giant I-beam sculptures.

The original goal was to create an art petting zoo: an alternate universe where you can stand right in front of someone making a sculpture, even if they're welding or using a crane, while your baby plays at your feet, with no thoughts about liability or mishap. That part of Socrates does kind of work. But the genius part of Socrates is the ecosystem of people who actually do this, and what they bring. Doug the Taoist has been doing tai chi in Socrates forever, and he introduces himself to every artist he meets and tells stories about past artists. In doing so, he creates a running narrative, handed from artist to artist. Frank is an eighty-year old man who comes to the park every day and talks about how he's waiting to die, how beautiful his wife was, and his WWII exploits. He sits in full lotus on the work tables, smoking Misty cigarettes, and fixes the tools. The unemployed Dominican men that fish in the nearby east river every day are the sharpest art critics I have ever met.

Socrates was a particularly aggressive grab. DiSuvero made plenty of enemies by insisting that this vacant lot, full of tires, junk cars and concrete block, was his to clean up and use to build his career. The relationship to the surrounding community wasn't always perfect, but the park still thrives because it is so much more than one artist’s playground.

Mark would never call Socrates art, and neither would I, but it is a successful act of meaning creation. And Mark would be disappointed to hear this, but I actually find it more meaningful than his sculpture. It's got the parts I like: the creative violence and its overcoming. It's got the Net Win.

So, I come to you in this essay from the middle of a substantial transition. My strong bias toward sculpture as the "right" way to make meaning is giving out. In fact, this bias has been so powerful that the first one hundred drafts descended quickly into tedious explanation about how I am not some loser who was forced to stop making art because I couldn't hack it, or because my art wasn't good. And right now I am going to catch myself at the edge of this particular cliff one last time and just say that I am not making art right now because when I look at the scale and scope of my sculpture and compare it to something that is truly giving, like Socrates, I think that it pales in comparison. Most art does. Even my all-time favorite pieces do less than the park .

Art’s primary job, in New York City, anyway, is to prove the wealth of very rich people to other very rich people. It can be wasteful. And it's all about one individual's devouring and excreting vision. We all love the image of the asshole artist chewing through the world in service of his vision. We cling to this idea of art even as it dawns on us that the rest of modernism has hateful side effects. We are rejecting the radical consumption-based individualism of buying a McMansion in a distant suburb, and rolling around in a really big vehicle willy nilly, and feeding at the more-cheaper-is-better trough of agribusiness. We are collectively deciding that the diseases of modernism, from diabetes and climate change to existential angst, are worth addressing. Why not subject the impulse to create and all its products to the same scrutiny? Is it so crazy to suggest that, just as there are transportation alternatives to the Hummer, there are ways to live and work creatively that reorganize redemption, consumption and destruction?

As you know, times are tough. We need to problem solve, to find new ways of doing just about everything. Last winter, as I stood alone in my studio, I realized that if I thought the most important thing I could be doing is make an abstract sculpture out of my junk mail while the financial system collapses and the climate becomes increasingly unlivable and this poor Obama fellow keeps his chin up as he recites his impressive litany of deeds left to do, then I am not firing on all cylinders.

I decided that what I care about is the environment, and the culture of environmentalism. I decided that I hate calling myself an environmentalist because the movement is decidedly puritanical, and that even as I reject the label, I struggle with my own infinite capacity to eco-ritualize on a daily basis. I started wondering why I feel like I have to fish other people's compostables out of the garbage and bring them home in a wet sack. I got really angry that Earth Hour, an hour of sitting in the dark, is the worldwide environmental action. I decided that it would be much more beautiful if everyone went and sowed wildflower seeds instead.

This germ of irritation evolved into Bed Stuy Meadow, which happened April 11, 2009. I got two hundred and fifty people to give me either money or a promise of time, and even though the 11th was pouring rain, almost one hundred people turned up to sow wildflower seeds on every single square inch of untended land in Bed Stuy in Brooklyn, where I live. The seed sowing day was a great success: more than 90% of the territory got covered, and the volunteers were on fire. But if I thought I was getting away from the arrogance and grabbiness of making meaning, I would have been very disappointed. A lot of people were angry because they thought it was a white idea in a historically black neighborhood. Or that it was about newcomers in a neighborhood with a fiercely protective old guard. The press coverage focused overwhelmingly on gentrification. And at this writing, in mid June, with zero flowers on the scene because they seem to have been choked out by weeds, I am finding myself getting intimate with a whole new class of people that I've pissed off: disappointed volunteers who feel like they got soaked in April for nothing.

I am sitting here at the most vulnerable point of a selfish, impulsive, problematic and totally redeemable project that could really explode into exactly the kind of thing I want... if it gets enormous enough. I am wrestling with the fact that I wanted a simple Wildflower Love Gesture and got Race War and Real Estate Anger and Disappointed Volunteers, but I know that this is a function of misunderstanding the scope of what I wanted to do. It's not a manifest destiny thing, it's a call and response. And I am just getting the first responses back.

A quick list of what I have, and what the Meadow yielded:

1. I have the original grabby gesture: seeing all this available untended land, lying fallow behind busted chain link fences, my neighborhood's greatest liability, begging to be turned into its greatest asset.

2. And I have a big handful of new neighbor friends who have even more ideas than I have, and more real-world knowledge, and backgrounds that are, I must admit, a little more practical than mine.

3. I also have, at this point, a responsibility not to run away. My role here is to make meaning, and I already said that much of that work is a matter of follow through. Pulling back now would make the meaning of Bed Stuy Meadow something that I can't bear, like the perverted inverse of A Tree Grows In Brooklyn, or the same old things we already know about how frightening it is for white people like myself to be called racist.

In other words, I am in this up to my neck, and the stakes are much higher than they ever were when I was screwing tires together. Thankfully, I am working with a handful of folks to get to that net win that this project requires. We are talking about making an Urban Farm Syndicate that takes actual responsibility of as many vacant lots as possible instead of just casting seed, and uses them to feed and employ people and conduct large-scale urban farming research. Right now it's just talk. But it could evolve into a lot of dignified, living-wage jobs for local people; tasty local produce in a neighborhood formerly known as a food desert; beautiful trees and shrubs that sequester CO2 and provide shade in perpetuity; a venue for trying out new ways to remediate contaminated soil; a library of urban farming knowledge; a seed bank; a project that improves Bed Stuy by delivering value to all the people who live here: rich and poor, black and white, new and old.

The vision is grand, and even more grabby than the original idea, but much less dependent on one artist's work. I am in total freefall, with nothing to cling to but my belief that freefall is how the best creative work happens. I have never been happier or more frightened in my life.