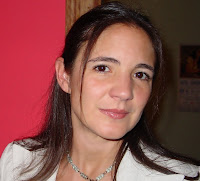 received her Master of Arts degree in Film and Media Theory, History, & Criticism and her M.F.A. in Film Production at NYU. She received the of the Arts Fellowship and was nominated for both the Directors Guild of America Scholarship and the Women in Film Scholarship for her documentary Claribel. She has twice been awarded the National Hispanic Foundation for the Arts Entertainment Industry Scholarship. just finished production of a documentary on immigrant street food vendors in . She resides in , where she writes and develops projects for her production company, clearthoughtmedia.

and drenched as the grass,

with drops of dew.

For twenty-three days I am terrified of dying. I am terrified that I or my parents or my grandparents or the dog across the street will die. Having decided I was barely surviving, I decide I am a Jew and hiding in Ohio. When I suggest this to my mother, she gently asked me how I can manage to be a Catholic and a Jew at the same time. I remind her that the early Christians were Jews and so was Jesus Christ. “Yes, that’s true,” she says, while patting my hand to keep me from pulling a loose thread from her brown and orange flowered bedspread. I tell my mother all about Anne Frank and remind her that people can be hiding for years and everyone thinks they are dead—but they are not, they’re just hiding. My mother says that my sister is not hiding.

I know she’s dead Mom,” I say. But I also think my sister is bound to show up at any moment, and so I should therefore be prepared. Thus began my love of lists. As long as I could list my thoughts, I felt a degree of control over them, as if listing was slapping them into submission. My most important list was a series of questions I was going to ask my sister upon her return home. The relief I feel from performing the exercise is so profound that it consistently overshadows the knowledge that she is not coming back.

Rather than add to my list, I always change it. I choose eleven, one number shy of my favorite number. There was some logic to this, but I can’t remember what it is. Maybe it’s the same logic my cousin Rachel (whose pajama party my sister and cousin never arrived at) uses when she decides to skip her 7th birthday. We find out a year later when she announces to everyone’s surprise that she is a year younger than she actually is. She says, matter of factly, “I skipped a year.” I skipped weeks and months after Gina’s death. I just wiped them off the map of time. And then I skipped time altogether when I took to daydreaming without realizing it. Anything could set me off. I fell into a trance once while looking at a beetle behind the garage. When I finally hear my mother calling , I have no way of explaining to her what I was doing. I can’t say, “I was looking at a beetle,” because that would sound stupid. So I say, “Nothing,” which my mother, like all mothers, takes to mean that I was doing something I shouldn’t have been doing.

Death does that to time, compresses it, slows it down until it doesn’t exist. A year feels like a week, three years, like three weeks. Carlos Casteneda’s Don Juan says that death lives behind you on your left, an arm's stretch away—ready to tap you on the shoulder. Lorca calls it duende, death as friend, death as companion. But Grace resides to my right, and she is louder and far more beautiful and more powerful than death. She is capable of coaxing death to do whatever she wants. She can make death shut up. Death whispers, “Certainly, if it can happen to you, it can happen to anyone, or worse yet, it can happen to you again.” Then Grace would whisper, “Yes, my girl, it is not only true but it is The Truth, so why worry about it?” So after twenty-three days, I decide I want to die. I imagine my death in hundreds of ways. I die riding my bike, smashed to a pulp by a reckless teenager who only has his driver’s permit. I die by drowning in dirty Lake Erie after jumping off the jetty. I freeze to death outside my bedroom window eating too much snow. I get struck by lightning. I die when I fall out of a tree and crack my head open, and instead of blood pouring out there are just dead thoughts that trickle out and collect in a puddle, which I then stomp on and watch scatter in the wind. However, finally thinking I understand what an attack of the heart means, I decide to die of a heart attack. Except in the case of my heart, it will not give me any warning—it will just beat slower and slower until it stops, like melting an ice cube under my armpit in the middle of summer—slowly or quickly my heart would start shrinking until it is the size of a pin head beating tiny beats, like a lighthouse beam flowing through my bloodstream, working its way out through my eyeball and then flying away. My heart would wave to myself, dead down there in the yard.