The Largest Locomotive on Earth 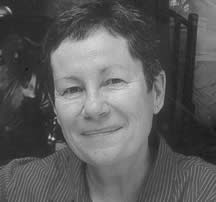 Holly Iglesias is the winner of the 2008 Kore Press First Book Award. She is a poet and translator whose work has appeared in Prairie Schooner, The Prose Poem, Arts & Letters, Barrow Street, Margie, Crab Orchard Review, Massachusetts Review and Spoon River Poetry Review. She has been awarded fellowships by the Massachusetts Cultural Council and the Edward Albee Foundation. She is the author of two chapbooks, Hands-on Saint and Good Long Enough, winner of Thorngate Road’s Frank O’Hara Prize. A critical work, Boxing Inside the Box: Women's Prose Poetry, was published by Quale Press. She teaches at University of North Carolina-Asheville and at Warren Wilson College.

Souvenirs of a Shrunken World is being taught in poet Kim Garcia’s Core Lit class at Boston College this semester, and it appears that her students connected with the poems right from the start. As the instructor, Kim passed along their first set of questions, curiosities and comments to me and invited me to respond. I was shocked at the amount of questions they generated about the first poem alone, “Running for the Fair: a Stereoscope.” Now I eagerly await their response to the book as a whole, as well as their reaction to footnotes posted on the Kore Press website that enhance understanding of the Fair and its historical context.

It goes without saying that it’s an honor and a rare opportunity to have such a chance to engage with engaged readers, and I share my response to them below.

You've brought in a great deal of curiosity, energy and insight to the reading of the first poem of Souvenirs of a Shrunken World. It's an incredible thrill to think of you reading my work and an honor to consider your questions. I trust you know that you as readers take part in making meaning of any poem by bringing your own associations to the words and experiences. This way the poem has a life of its own and continues to grow even after the author has let it go.

A few responses to the issues and ideas you raised:

A stereoscope is an image that you see in a three-dimensional way by looking at it on a special holder, which presents two of the same photograph but from a left-eye and a right-eye point of view, which provides depth. Stereoscopes were very popular around the turn of the 20th century.

My book is very much concerned with point of view, framing and the power of images, both still and moving pictures (thus the strobe). Around this time (1904) Kodak cameras became affordable so regular people could take snapshots pretty easily; also motion pictures had begun to be viewed by a general audience. In a WiFi, You-Tube world, we take such things for granted, but at that time such innovations were mind-boggling and really effected people's attitudes.

Another thing: the Fair took four years to build and then it was demolished, razed to the ground in a few months. People knew this would happen from the start and so were nostalgic about it even before the buildings were gone. Thus, the importance of souvenirs, particularly photographs--the only mementos, or traces, of an awe-inspiring, life-changing experience.

So, back to the boy and girl, whose poem comes before all the rest. I wanted to set up the importance of young people--young country, young people, young century--and how impressionable they are and what kind of influence something as enormous and thrilling as the Fair would have on them. These young people would live out their lives in the 20th century and would take these influences and ideas forward, so we need to keep an eye on the impressions being made on them. They could easily have been my grandfather or grandmother, who were in their teens at the time and who, as recent immigrants, were new Americans and trying to learn how to be a Real American, which the Fair tried to demonstrate.

So: yes, young people in the country, lots of chores, remnants of old-fashioned life soon to be extinct (slop pot, cheese cloth, home-made sausage, etc.) due to rapid population shifts and technological advances. These are kids who have no experience with electricity, radios, automobiles, or telephones!

There were many hoboes wandering the country, riding the trains and living in shanty towns. While the notion of hoboes was also romanticized, the ugly truth of it was that they were part of the huge upheaval and displacement that came about as industry and commerce became centralized in large cities and people left small-town and rural life. A time of economic boom and bust, and thus insecurity and crime and labor unrest. So, that rumbling train doesn't merely symbolize an escape to the bright lights of the city (where the Fair is held), but also offers a foreboding of things being run down, of the danger inherent in too much "progress" too fast.

The past and future at this cusp-y time were neck and neck; we as a nation could've stayed as we'd been, or been more deliberative and patient, or barreled ahead and worried about the consequences later. You know which way it went. That's part of the over-arching metaphor of the Fair--it celebrates a century of progress since the Louisiana Purchase, but that progress and that hugeness and that speed came at a price. Hopefully by the end of the book, you'll be able to see some of the cost of that progress, not just to its "victims" but to the perpetrators as well. Treating humans inhumanely or with disdain injures both the giver and receiver of disrespect. Plus it's dangerous, planting seeds of future divisions.

Boy and girl: traditional roles: he's gets to indulge his adventures, she watches the train pass by. And the cars rolling by, strobing the cornfields, suggests not only the flickering images of movies, but also the fragmentation of families, communities, fields of vision, the human family that is coming down the tracks.

The largest locomotive on earth was on display at the Palace of Transportation at the Fair. It was on a turnstile; the wheels spun in place; and its enormous headlight slashed the walls of the enormous building. The name of the locomotive? It was called the Twentieth Century, I kid you not. So, there's nothing subtle in my mind about the image of a huge iron behemoth barreling down the tracks and the dangers of getting in its path.

Warning! Here comes the 20th Century! This caution lies beneath the entire collection of poems. Everything—and I mean every single thing—that came to characterize the 20th century, in all its glory and all its atrocity, is evident at the 1904 World's Fair in St. Louis. And these two young people are racing to see it, yearning to take it all in, running to catch the train that will take them there. Young people, a relatively young nation—each full of energy and optimism, as well as ignorance and naiveté.

Posted by Kore Press at 2:51 PM No comments: Links to this post