Political Poetry: Who We Engage

Blogger: Spring Ulmer, Kore Press First Book Award Winner for 2007 for her manuscript Benjamin's Spectacles, selected by Sonia Sanchez and due for publication this summer

I want to address the subject of political poetry today by responding to David Wojahn’s essay “Maggie’s Farm No More: The Fate of Political Poetry,” featured in this month’s The Writer’s Chronicle. I was struck, reading Wojahn’s essay, by his overwhelming focus on male poets. And no, I am not here to rewrite a Virginia Woolf essay and debate whether women or men are more peaceful, but I do think that to approach political poetry as Wojahn does in this essay is limiting -- not only to the art of poetry and the diversity of its practitioners, but to the possibilities of its ability to act as a social catalyst. 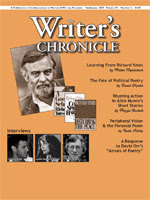 I believe I understand where Wojahn is coming from, as I grew up under the tutelage of parents who participated in the Civil Rights Movement, actively protested the Vietnam War, and then poured themselves into a carving out a largely self-sufficient, back-to-the-land lifestyle for themselves. It makes sense, to me, in other words, that Wojahn begins his essay with Bob Dylan’s “Maggie’s Farm,” a refashioned old folk tune. I, too, trace my radical roots back to the land and its songs and speeches inciting and commemorating struggles against the imperialist, capitalist system.

Yet, I am left undeniably cold when Wojahn then compares Dylan’s artistic melding of the personal with the political to W. S. Merwin, Robert Duncan, George Oppen, Robert Lowell, Hayden Carruth and other male poets of the 1960s, while simultaneously dismissing women writers Denise Levertov, Muriel Rukeyser, and Rita Dove. Wojahn accuses these women (and Robert Bly) of being unable to “blend a desire for personal mythmaking with social consciousness” and claims that their protest poetry is just “decidedly bad.” And I grow progressively colder as Wojahn professes the dated quality of Carolyn Forché’s writing (her poetry has, he argues, “passed into oblivion”) and then applauds the work of Milosz, Herbert, Hikmet, Ko Un, Vallejo -- some of whose voices Wojahn forgets to acknowledge Forché helped bring to North American and English-speaking readers. Can it really be that Adrienne Rich is the only woman (and Komunyaka the one North American male of color) Wojahn salvages from the wreck of what he calls “bad” political poetry? What, too, does it signify when Wojahn thereafter completely disregards all confessional poetry and language poetry? I smell something aslant.

Let me say now that I hope not to fall into the trap of an attack. I am not trying to destroy the Left or to debase what Wojahn sets out to say -- which is that good political poetry isn’t to be found in poems on the Poets Against the War website, marinated as these poems are, Wojahn insists, in North American culture that kills poetry’s complexity, stuffing it, instead, full of predetermined accepted definitions of the social and the personal. Rather, I am interested in pushing this dialogue to a more complex emotional and intellectual space.

What I would like to do is to illuminate the politics inherent to being a non-white-male poet in North America -- a politics which is synonymous with the struggle against the erasure, whitewashing or marking and romanticizing of writings by silenced populations, including migrant farm-workers: today’s sharecroppers. Perhaps, it occurs to me, our voices aren’t being heard because so many white men are still too busy arguing about what good and bad writing is and providing recipes for the crafting of such writing, rather than listening to and providing openings for the voices of those who cannot afford time enough to write.

This summer I went to Rwanda in an effort to throw aside my cynicism. There, I helped build a vocational school for children who are unable to attend an academic school because of the enormous educational fees. (Some of these students asked me, personally, to help find them sponsorships. Click here for more information.)

When I think of these children, I remember their dreams and how they sang and how one boy crafted paper decorations that transformed the ceiling of his windowless one room home into a fluttering sanctuary of poetry. When I listen to Wojahn’s need for “good” political poetry, I want to tell him that this poetry is around us and inside us. It doesn’t have to do with crafting the perfect poem; it has to do with getting our hands dirty. I didn’t have to go to Rwanda to find this out; these same lessons were also presented to me as I taught English composition at the University of Arizona -- the true teaching of which occurred one-on-one as I took the time to listen to my students’ stories. The lessons were also present when I taught writing and photography to migrant farmworkers’ children -- many of whom work all day in corn fields and go to school at night. As I drove around from camp to camp, teaching on picnic tables or in other teachers’ classrooms throughout Illinois, I never wondered whether my students’ poems were good or not. And when teenage Yvonne Flores wrote about her ten-hour work day, I did not question the quality or worth of the political poetry I heard in her voice, as she penned, “The last cuadro was hard cause the machine didn’t take out any of the espigas.”

Political poetry today is at the cusp of awakening. It can be found in Illinois’ fields, in Iraqi bloggers’ websites, in music that travels through illiterate communities, as well as in discussions between impassioned students at universities. To be aware of its omnipresent gift, maybe we need to change our definition of what changes us socially, consciously, and politically.

I was writing yesterday to Lisa Bowden at Kore Press about how I had feared listening to the CD she edited, Autumnal, as my father is sick with a rare blood cancer and I didn’t want words of grief to plunge me into depression. I shouldn’t have feared. The words led me away from my fear and let me go into the word… I heard women’s voices. Jane’s flute and piano, Niki’s washing, Frances’s goldfinch. If only all loss was so commemorated, I thought. If only each of us could be so recognized. And I thought of those suffering in Iraq, Afghanistan, and of those with AIDS, cancer, of survivors in Rwanda and all over the world, and of women who live through genocide, only to be rejected by their families and husbands because they have been raped. 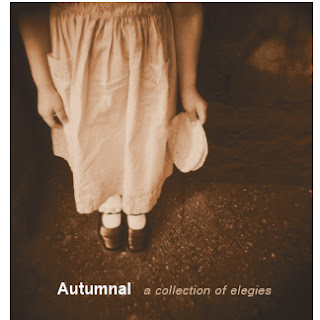 I thanked Lisa for the CD, and confessed that before my manuscript, Benjamin’s Spectacles, was selected by Sonia Sanchez for Kore Press’s First Book Award, I had just about accepted that writing for me would be a solitary practice, as I had become convinced that the publishing world was too high-society and connection-oriented to break into. Now, with my first book inching up over the horizon, I keep thinking of all the other deserving people out there whose voices aren’t heard. Their voices keep me committed to doing the work that is grown through dialogue and action; work that publishers like Kore Press do and wholeheartedly embody.

So, to slowly weave my way back to Wojahn’s argument and his assertion of the “good” versus the “bad” political poem: I used to be aggressive and self-hating in my own need to proclaim others’ rights; I bullied and fought. Today, overlapping social locations between many genders and races, cultures, classes, abilities, and geographies, colors me. The last thing I desire now is the fascism that so often claims to be activism; real activism seems more and more contemplative and hands-on to me these days. I think of Sonia Sanchez and her challenging the Black Panthers to be more inclusive of women, and of the times in the past that I looked to separatist movements for inspiration. Now, I am seeing more of the worldly hate and invasions as separatist. The good/bad dichotomy, as I see it, doesn’t really cut it any more.

Today I see more vividly than ever the limits of academia and of my own privilege, but I feel less trapped by my ethics, which at one time offered me no way to accept myself and provided me little compassion for anyone but the absolute underdog. I am still struggling to get myself to a place of permission, so that I am better able to write, and hence, to better give. One thing that helps me is reading. Reading a multiplicity of voices, a multiplicity of poetry. Political poetry is more than what is on a page. It is real, lived. It is how we speak and how we listen and who we engage.

Posted by Kore Press at 6:43 PM 4 comments: Links to this post