Being a Woman: My Only Sin 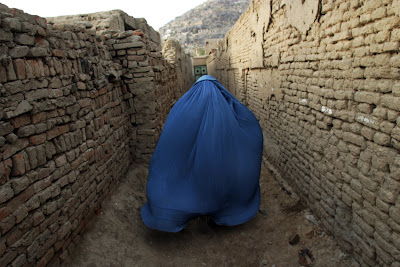 (Eds Note: This essay was written by one of our writers, but contains no identifying information due to security considerations.)

I love my job. I know it can help bring changes in women’s living conditions in my province. But there are obstacles.

Recently I received a death threat from Taliban. I was on my way to work when a neighbor called out to me and said, “You must return home because we found a letter from the Taliban threatening you, and you must quit your job right now.”

“I want to see that letter,” I told him.

He said, “That is fine,” and gave me the letter, which said the Taliban in my province were planning to kidnap me, my sister and my father and then kill us.

As my family was at risk, they decided to move to another city. They were not happy about leaving me alone and asked me to come with them, but I thought about my responsibilities for the women in my province, so I remained behind for my job. I am not living with my family any longer. I only go out covered in a burqa. I am still working.

My early life began like this: when I was seven years old, my mother got sick, so I began to take care of our home, washing clothes and dishes, cooking. One night during the Taliban regime, our family left Afghanistan at midnight and headed to Iran. It was cold and dark. We were traveling in a car and the roads were unpaved and dusty. Finally we reached the Iranian border. We found a place to stay for the night, and in the morning we crossed a river and then took another car to Zabol in Iran.

In Iran, we started another life with many difficulties. My father was working and my mother and I began to work also. We deshelled nuts for a shopkeeper who paid us about 1000 toman so we had enough to buy bread. I have many bad memories from that time. I remember when I was eight years old; I went to bakery to buy bread. I was the first in line, but the baker did not give me bread because I was an Afghan. I waited until 10 p.m. that night. It got darker and darker and I was afraid, as our house was very far. Finally I got the bread and was running home and, on the way, crying. When I got home, my mother was waiting at the gate, also very worried.

At that time I wanted to study, so I tried to enroll in official Iranian schools, but as I was an Afghan, I was not allowed to attend the schools. I did find a literacy class and I started my primary education there until sixth grade. That meant when we returned to Afghanistan after the fall of the Taliban, I could go directly to school to learn subjects, not simply to learn to read.

The first day of school in Afghanistan, I was so glad. I felt I was floating in the sky. It was a sunny day. I was with many Afghan girls standing in the yard of school and waiting for our teachers. It was 2001 and I was in the sixth grade. We did not have chairs, desks, books, or a blackboard and our floor was dirt, since everything was lost during the Taliban regime. I was an intelligent student and the teachers loved me. I never missed a day, even though my mother was sick. I got up early in the morning to clean the house, make breakfast and cook lunch.

In 2004, my life faced another tragedy. My family forced me to marry an uneducated, older man. I was sixteen years old. The man I was engaged to was my father’s relative. From the beginning, every day, I was beaten by him. He wanted to prevent me from going to school; he never allowed me to see my friends and relatives. I tolerated everything because I was an Afghan and it was shame for my family if I complained about my husband.

After three months, my husband sent me to my father’s home and left me. When I was 17 years old, he came and divorced me. I was pregnant. I was happy that this cruel man would leave me alone, but I was worried about my child. After he divorced me, people started to say bad things about me because they did not accept a divorced woman. My child was born in a hospital but since then, I have never seen him. It was a boy and my husband’s family came to take him forever.

There was no way forward for me except to continue my education. I finished my pre-university classes and wanted to go to a university. But my mother was again sick and required an operation that cost the equivalent of eight-thousand dollars. So I worked for three years to help raise this money. My mother had the operation and is now fine. I feel so happy to see her finally healthy after 17 years.

As for my own future, I don’t know what it will be. I know I want a university degree someday, and I know I will keep trying.