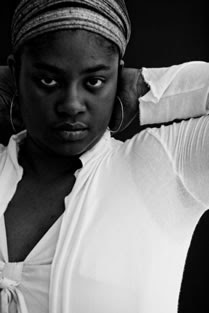 My Kind to Your Kind
by Niki Herd
To live in this country with the skin on my back is to always be suspect. I walk into a store—I become a potential thief—and am followed. I pick up the telephone to address an issue at the workplace and colleagues and clients marvel at how articulate I am. Just the other day, a server at one of my favorite, now-defunct, eating spots confided that the owners thought I was anti-white.

The important word here is past. Past mistakes. Past indiscretions. Past moments of bad judgment. Past disloyalties. The word assumes that which is not current, or ongoing, or systematic. When flocks of revolutionaries came to this land to flee political oppression, there was nothing wrong with them wanting to flourish in a new home, but the blood of blacks should not have been systematically imported to do so. Nor should tongues have been excised and rosaries placed around the necks of the people that enjoyed this land before you.

Since you may think this the rhetoric of the past, let me address the current issue to which I write which seems all too much like the past—that group of teenagers protesting outside of an Arizona high school today. How by law, one of them could be stopped by police, asked to prove his or her citizenship while inside the school, and schools throughout the state, courses like Mexican or African-American studies are being banned to prevent what you call ethnic chauvinism. What is clear to me as I drive by is that the focus should be on equipping these children with the tools they need to succeed. The problem rests with a state that de-values education and continuously refuses to educate its children properly. Mexican-American studies is not the problem. What is also clear to me as I drive by cardboard signs and honking horns, is that these children, who they are and their history, will never be accepted—and they share a lineage with the people south of us who are systematically pennied and pimped, who fold our bed sheets, wash our fine dining dishes, tile our floors and pick our poisonous crops. They have become the unacknowledged American workforce functioning to make our lives easier, comfortable and profitable in a country that befriends its Latin brothers and sisters only when convenient.

Let me introduce the players. Let me clarify what is at stake.

Good people, good friends are in my life, many of whom retain beliefs significantly different from my own about those topics that change the tenor of dinner such as the choice between war or non-violence, abortion or god. They are friends because their actions do not at all minimize my humanity. Despite their beliefs, there is some kind common ground we share and cherish. But you and I are not really friends, and we are on two separate sides of the bible or the flag if you will. And I am not sure where to go from here.

Several years ago an ex-NFL player drove his Bronco onto the Los Angeles freeway after killing his white ex-wife, and I watched the racial river widen. In my own back yard, it widened again when folks were protesting the re-naming of a non-descript university building in honor of Cesar Chavez. The latter happened here in Arizona, the same state getting the attention recently for legalizing racial profiling and removing ethnic studies from the elementary and secondary school curriculum. It is the same state that did not want to honor a Martin Luther King, Jr. holiday. But I think it unfair that Arizona is making all the headlines for the state is only enacting what you have taught her. More than seven letters and four syllables connect you. Arizona is your daughter child, and with your history of Eurocentricsm, you have educated her well.

It was James Baldwin who alluded that the relationship of my kind to your kind was like a marriage, and I have never been into until death do us part, but since the children are here having shed baby teeth, ready to assert themselves in this world, and we find ourselves joined at a time when folks are being arrested for mopping floors, or having a rake in their so brown hands, don’t you think we need to be honest about where we are and how we got here? See—the honeymoon is over. Actually, there never was a honeymoon. And the children say all hell is about to break loose.

Posted by Kore Press at 3:38 PM 3 comments: Links to this post