A speech from a vigil for recent LGBTQ youth suicides, by TC Tolbert 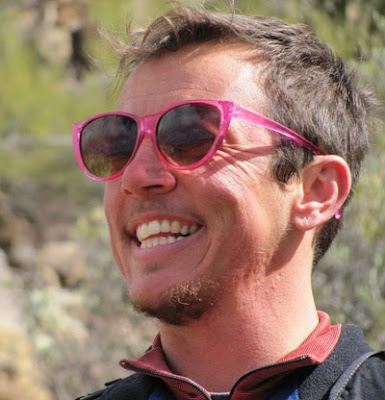 TC Tolbert is a genderqueer, feminist poet and educator. TC earned his MFA in Poetry from UA in 2005 and currently teaches Composition at Pima Community College. S/he is the Assistant Director of Casa Libre en la Solana and is a member of Movement Salon, a compositional improvisation group in Tucson. S/he is a collective member of Read Between the Bars, a books-to-prisoners program, and s/he spends his summers leading wilderness trips for Outward Bound. TC’s poems can be found in Volt, The Pinch, Drunken Boat, Shampoo, A Trunk of Delirium, and jubilat. He won the Arizona Statewide Poetry competition in 2010 and his chapbook is forthcoming from Kore Press.

According to the American Association of Suicidology, 12 youth per day die by suicide. Suicide is the 3rd highest cause of death for youth between the ages of 15-24 – right behind accidents and homicides. Now even if we apply the most conservative estimate that 1 in 10 of those youth is LGBTQ, this still means that 1 queer kid a day is dying by suicide. That is over 365 queer youth per year. And yet, all we know of – what has pulled us here together – are 8. What about the other 350-something lgbtq youth who have died by suicide in the last year? What do we know of their stories? Why don’t we know their stories? When we look at these 8, who do we see reflected back at us? Who do we not see?

You may have also recently heard about the horrible attack of a transwoman in the Bronx (she has been mis-identified as a gay man in the media but she used female pronouns and went by the name La Reina – the Queen). 9 attackers, ranging in age from 16-23, brutally tortured her and two acquaintances for being queer. Some NY detectives are calling it “the worst hate crime they’ve seen in years.”

The grief we feel as a community and as individuals when faced with such violence is swift, tremendous, and just. When youth, the very embodiment of hope, growth, and change are snuffing themselves and each other out b/c they cannot find evidence of that hope, b/c they cannot see themselves reflected, or, perhaps, b/c they cannot stand the reflection that they do see – our response should be grief. We are losing something and we have lost people. I am proud of us tonight for being honest, for being vulnerable. For coming together in our grief.

And yet, I ask each of you not to let this grief become a weapon. I ask us, as a community, not to let our losses be compounded by separation, by a perpetuation of hate, violence, retribution, or otherness. If convicted of a hate crime, their perpetrators could get 3 years, 5 years more. Given 3 more years will La Reina feel safe walking in her neighborhood? Given 5 years will we hear Tyler’s violin again? No. Hate crimes legislation will not and does not make queer people safe. Prisons perpetuate violence, they do not end it. I’m sorry but hate crimes legislation won’t bring back Tyler Clementi, Asher Brown, Seth Walsh, Billy Lucas, Raymond Chase, Justin Aaberg, Zach Harrington, and Aiyisha Hassan. Hate crimes legislation won’t bring back the over 30 transwomen who have been murdered in the last year. We can punish the most obvious perpetrators but it won’t correct a system – a world - in which racism, homophobia, and transphobia are status quo.

Thing 2 is neither more important nor less. And I believe with every fiber of my being that if each of us do both of these things, we will see the radical shift we are asking for. I am asking you (and myself) to take responsibility for the privileges we do have in this world (and we’ve all got some – I’ve got an enormous of amount of it) – be it white privilege, male privilege, straight privilege, socio-economic privilege, the privilege of education, of leisure, of time – whatever privilege we have, use it to advocate for someone who is unlike you yet who is also oppressed. Let’s stop acting as if there is such a thing as a migrant issue or a women’s issue or a people with disabilities issue. These are all queer issues. Put yourself in dialogue, in proximity, in solidarity work with people who do not look like you, think like you, believe like you. So we’ve come out on campus this week – that is the first step, not the last. Let us now be big brothers or big sisters and come out there. Let us now volunteer to teach in prisons and come out there. Let us volunteer at shelters, in schools, at migrants’ rights organization, at Palestinian liberation actions, at Jewish film festivals, and come out there. Give time, give money, give. The sooner we stop segregating ourselves from the issues that keep all of us down – the closer we come to eradicating oppression. If we want real change, if we want to end violence and bullying, we’ve got to know each other – we’ve got to work in solidarity, we’ve got to connect.

Please consider not just those stories you heard today but also the stories you didn’t hear. Search them out. Make room for them in our movement. And please, make movement any time you have room. Thank you.
Posted by Kore Press at 2:18 AM