Autumnal is a collection of contemporary elegies by 15 poets and a violinist I compiled this fall during what the Chinese call the season of grief. When faced with great loss, many artists search for remnants of memory and try to make meaning by stitching something new out of what is gone. It is Persephone's, or a Shaman’s, desire: the deep, dark silence and the urge to make something out of it. Transubstantiate remembering into an organized, aesthetic fact and you shape the no-thing back into a thing again. What the living do, if we are to follow Marie Howe’s edict, is to make music and poetry and begin to touch, and be touched by, the emotional landscape of grief. This is territory beyond language, and here reconstructed with language—an attempt to speak the unspeakable. 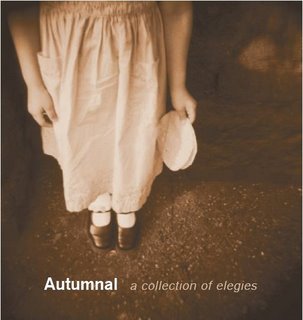 Why audio? Sound, Olga Broumas says, is the “ear of heart.” Hearing is the last sense that goes in the dying process, while making sound is the way we come into the world—with a cry. The first hard truth I realized shortly after my mother died was that I would never hear her voice again. I thought of a message she had left on my voicemail. When I found it was no longer there, I called her answering machine and listened to her outgoing message. I strained my ear to hear every drop of her in that old cassette recording. It was the same few words over and over and me wringing each phrase dry with listening every time I dialed.

I began collecting these aural works at that time. It started out as a search for my mother in the voices of others and then became an effort to leave behind traces for others’ loved ones, from “ear to heart.” The pieces came from 18 different sources collected in a few short weeks. Everyone had poems, the experience of some loss on the tip of the tongue. A hand-held digital Olympus recorder went to Mexico City and back to gather Tedi Lopez Mills’ deep and throaty voice. The same recorder collected poems on a back porch after work, at the dining room table, in the Kore Press office and backyard, Niki's floor on her lunch hour. Some sound was digitized from The Poetry Center recordings in the 90s; many came over e-mail as MP3 files from poets speaking right into their own computers on the East and West coasts. The violin music of Vicki Brown, from her CD Winter Garden, is a piece I played for my mother in the hospital during her last days. It is called "Take Flight," and while it was written to celebrate the artist’s return to the world of music from science, it became my mother’s swan song, her own final flight away. The music has such a sad, beautiful, sound.

Autumnal was funded in part by a grant from the Arizona Commission on the Arts.
Posted by Kore Press at 12:02 PM