What She Saw Down There


Let’s assume that when Persephone returned--older and wiser than before she was abducted by Hades--she emerged from the underworld profoundly changed by what she’d seen, things her family might never experience or understand: soft, wide veins of gold and silver, underground rivers, rotting bodies and buried evidence, the obligations of ruling a dark, secret kingdom. And now she also knew how it was to live with--even love--a bad man.

Home, safe, she might want to keep that stuff to herself. Or she might want to tell everyone every indiscreet and true detail of what she saw down there--to recreate the fusty smell of reed lamps burning in the underworld, the cold touch of the blind, white salamanders she kept for company, the self-gratifying caresses of a powerful god. 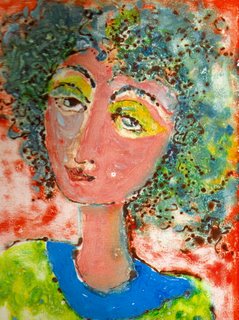 But Persephone had a good reason to self-censor her report: she was not free of Hades, after all. The deal was that she would return to him for four months every year. And it’s hard to tell the truth about Hades when you’re still bound by a contract, a sense of restraint, even love.

When Carolyn Forché selected my manuscript, Various Modes of Departure, as the winner of the 2003 Kore Press First Book Award, and said I’d written my poems with "horrific grace," I already knew that I’d broken my contract with Hades. I’d told too much. I’d written about the physical and social decline of family members, the denouement of love and shameful episodes of our lives. Some things were just too private to put out there--not for me, but for them.

My mother died six months before the book came out in September 2004, and so I never had to face her and explain how it was that I could tell the topside world that her husband had lost his mind, had gone from being a war hero to a lost soul in diapers. To me, what I saw in the hidden realms was poignant, and demanded to be told in the light of day. To my family, these revelations might seem insensitive and self-indulgent. To my southern mother, who did not air her dirty laundry for more than 80 years, my self-expression would have seemed malevolent, unholy and seditious.

These were poems ultimately meant for strangers, people who lived on the bright green surface of the earth, unfamiliar with the burrows or subterranean villages where they might actually run into any of us at the grocery store.

It’s been two years since one documentation of where I’ve been and what I’ve left was sealed into print as a small book of poems. The terrain I reported from was personal, and didn’t demand truth-telling. It was not, after all, necessary reportage from Rwanda or Darfur. And even as I work on a second book, I realize I am still under contract to the people I love.

And continually, I ask myself, What else really must be told?

What, indeed, do we talk about, and what do we keep secret, at least until those we love can no longer be hurt by our truthtelling?

At the Sewanee Writer's Conference last week I did a reading of a story that will cause anxiety to my mother, should the day arrive that she reads it. The irony being that I'm doing all I can to publish a collection of stories that will include that particular piece. So if all goes well, in a wierd sort of way, she will read it.

The story contains a grown daughter, and a mother, and a father. The latter character being based almost exactly on my father, who died six years ago. While the two women aren't at all autobiographical, the emotional truths are as real as my own. Never, in the thirty years since the events of my childhood that inspired this story, have my mother and I discussed these truths. We both know the facts, but we don't know the sorrows behind them.

By posting this now, by revealing I have published a story (it's in the current issue of The Florida Review) that I've kept secret from my mother, I do take the risk, I suppose, that she'll learn about it. She doesn't believe in the internet, thinks it's all too much trouble, never goes online. But that doesn't mean that word couldn't filter back to her. Perhaps a part of me wants to be outed. I'm with you, Deborah. I don't know how Persephone could have managed the silence. If in fact she actually did.

Excellent article, and rather disturbing thoughts on the whole writing process.

I teach undergraduates, often conducting courses on literature and gender. The notion of silencing, of self-censorship, is one that is powerfully present in so much of the discussion of women's texts.

I suspect, at the end of it all, Persephone didn't keep it all quiet, really. She just found some sneaky, subversive way to get it said. That's my suspicion.

I'm glad to see the start of this blog, and will be stopping by often for updates.